Talk to any lotto enthusiast you know, and there’s no chance they haven’t heard of Mega Sena. The popular Brazilian lottery has a long lotto history and an incredible reputation, which is why it is one of the most liked lotteries in South America, slowly taking over the world.

The largest lottery in Brazil, Mega Sena, is organized by Caixa Econômica Federal bank, a government-owned Brazilian bank, and it has been making Brazilians happy since 1996. The first draw in Mega Sena lottery history took place in March 1996. Since then, Mega Sena is drawn every Wednesday and Saturday evening. The draw is televised on the local TV station and somewhat bears resemblance to the biggest Spanish lottery El Gordo. These two are similar in the fact that both draws include numbers being drawn from two spheres. Also in Mega Sena draws, just as with El Gordo, numbers are drawn in pairs. Picked numbers then form a two digit number from 01 to 60. The first sphere carries numbers from 0 to 6 which represent the first digit and the second one numbers from 0 to 9 to represent the second digit. If 00 is drawn, it counts as 60. When all 12 numbers, which form 6 two-digit numbers, are drawn, they show the winning combination for that draw. 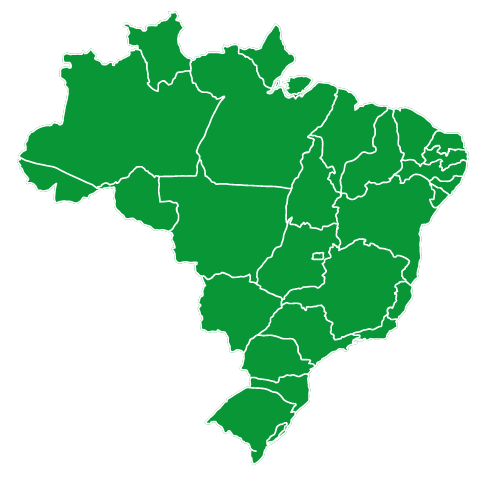 Players can choose anywhere from 6 to 15 numbers out of possible 60, and prizes are won if 4, 5 or 6 numbers are guessed correctly. The prices of tickets vary according to how many combinations are possible depending on numbers you choose. One combination (choosing only 6 numbers) costs 0,9 US dollars (3,50 in Brazilian Reals) but you can pay as much as 4,487 dollars (equivalent of 17,517.50 Reals) for 15 numbers, where 5,005 combinations are possible. The odds of winning the jackpot with just one combination are 1 in 50,063,860. You can also choose to play Supresinha, to generate numbers randomly, and you have an option to play 2, 4 or 8 draws in advance. The biggest jackpot ever won on Mega Sena was drawn in 2015 and brought its lucky winner more than 52 million in US dollars.

Also, there is the special draw called Mega de Virada, held every New Year’s Eve. Since it has the largest jackpot in Brazil by far, it is the most popular game under the Mega Sena lottery. It also holds the record for the biggest jackpot which is more than 78 million dollars for 2018. Also, if the jackpot is not drawn in Mega de Virada, it is divided between people who guess five numbers correctly. So, there are really great chances of winning the big prize. Try it out today!

This website uses cookies to improve your experience while you navigate through the website. Out of these, the cookies that are categorized as necessary are stored on your browser as they are essential for the working of basic functionalities of the website. We also use third-party cookies that help us analyze and understand how you use this website. These cookies will be stored in your browser only with your consent. You also have the option to opt-out of these cookies. But opting out of some of these cookies may affect your browsing experience.
Necessary Always Enabled

Any cookies that may not be particularly necessary for the website to function and is used specifically to collect user personal data via analytics, ads, other embedded contents are termed as non-necessary cookies. It is mandatory to procure user consent prior to running these cookies on your website.